Team Facelift: I want to have your baby

Fresh up, Team Facelift delivers up another solid (and yes disturbing) video to a great song.
Posted by Mr Kiji 1 comment:

Labels: i want to have your baby, sexual perversions., Team Facelift 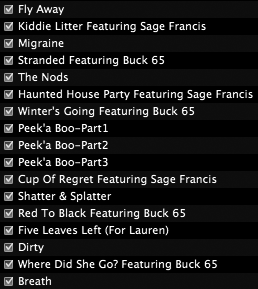 Probably one of my favorite Classics mixes so far (which is tough..since they're classics..but whatever)...enjoy!
http://www.mediafire.com/?agdtzmzmnzh
Posted by Mr Kiji 1 comment:

I know, I know, I'm lagging on mixes. Well I promise to have a few new ones up this week. It's just been busy in reality so the interweb has had to play second fiddle. Anyways, if you're bored in your cubicle or just at home playing xbox in your boxers check out this blog, its been amusing me for the past week straight. snacksandshit.com
Posted by Mr Kiji No comments:

Directed by So Me, the creative force behind Ed Banger Records as well as the critically acclaimed Kanye West/Hype Williams "Good Life" Video. I know every hipster and neon negro is going to tell me this video is mad old and already reposted on other cooler blogs several times tighter then their pants are but hold on...I'm getting old.. I can't keep up. Either way it's a straight forward concept used very effectively without being overly polished.
Posted by Mr Kiji 1 comment: 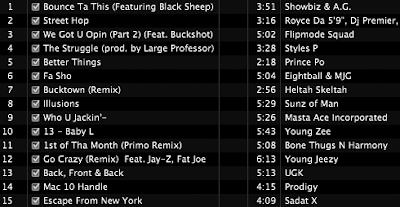 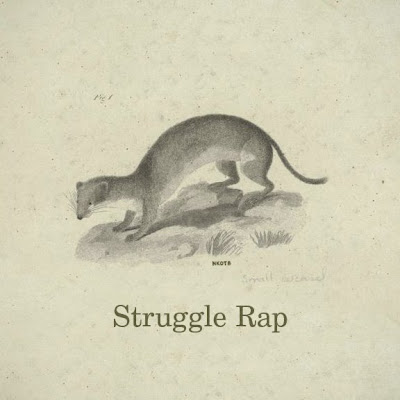 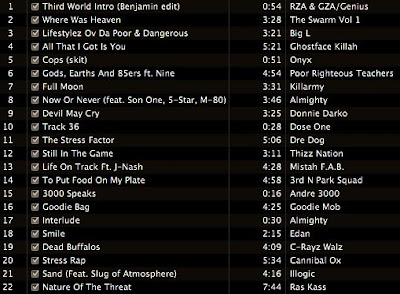 Hello, this is a new mix entitled, 'Struggle Rap'. It could inspire you, it could make you real blue, it could make you think. I've been working on it for a couple months. Just nit-picking @ it w/ a fork. I bet it has a bunch of tracks you already have & know. Some of the tracks might seem corny; but this one is all about placement, order, & restraint. The content speaks for itself. Stay grand...

http://www.mediafire.com/?qnnmi3zjtno
Posted by Benjamin No comments:

Patience In A Shitstorm 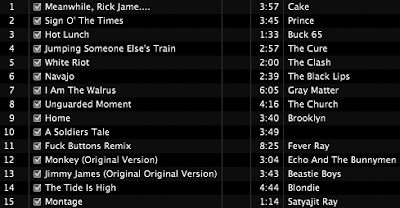 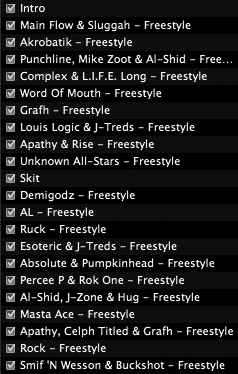 Every week expect to get your backspin on with some backpacker rap.

Not brand new but pretty great.
Posted by Mr Kiji No comments:

Do not ring the bell, there is nobody home...a formal intro

Where to begin. Do we start with the fact that he spent all of the money from Dr.Octagon in one week on a hotel room with a rotating roster of prostitutes, thus creating the album Sex Styles? That he was a porno star? That the song Bow To The Master is a direct indictment of RZA and Mental Side Effects is a direct indictment of Andre 3000? According to the man himself he only drinks seltzer and brand x corn flakes because mad niggas come and eat your food on some freeloader shit. Oh you're hungry? Sorry, I only have seltzer and corn flakes, better go to the store man (a snippet from this interview). From the man who invented (literally) "underground rap" (he calls it just naturally being street. Back then everyone was on some different shit. Now theres just too many fish in the pond) here is approximatley one song from each of the albums he has been involved in (I didn't put anything on here from The Cenobites and I don't have The Big Willie Smith EP). I am missing some stuff, (on keith mix 1 I added two songs from Dr.Dooom, the album that comes after Dr. Octagon where he kills Doc Octo in the intro) but this is a pretty good start. The song Bow To The Master was the first part of Keiths paranoid anti-RZA jumpoff. Part two was an entire Album titled the Analog Brothers with none other than Ice - T. The songs from the Personal Album (every copy of the cd was hand autographed by Keith) are all slow love songs. We can be here forever. Without further yammerings, heres the best to ever do it.
click here for keith batch 1
click here for keith batch 2
Posted by ace 12 2 comments:

sorry i forgot to add the playlist. a doey.

Funny Song of the Week 3

Business Time by Flight of the Conchords.

...
Posted by Mr Kiji No comments:

Bow to the Master. An ode to the best.

keith balls harder than you

and when hes done wiling. then comes this.

After the Andreis Kiji mash up post of the old Peer Pressure video, I wanted to add this as a comment but Kiji has been putting in work. The first album from the Ballerina and the Wankster, pretty young blood but pretty banging. H.N.I.C for life.
click here for the realness 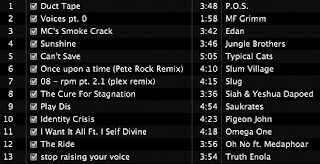 Funny Song of the Week 2 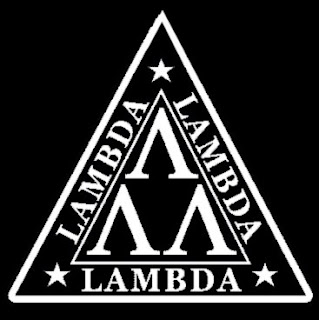 There are time's when a sample is used so well and seamlessly that you can't imagine the sample used in any other way...that perfect way to create something new while honor what came before it. Donald Byrds,"Wind Parade"/Beatminers 1993
Posted by Mr Kiji No comments:

There's a party in my pants...

..oh I also want to welcome Ben from KLAIMCO...
Posted by Mr Kiji No comments:

Labels: klaimco, Party in my pants 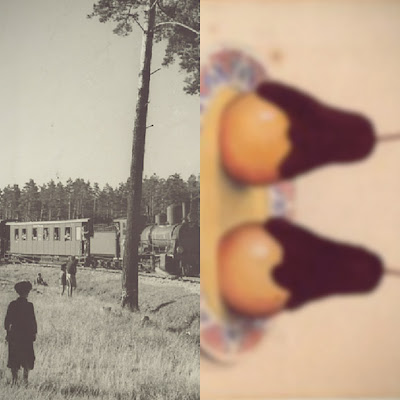 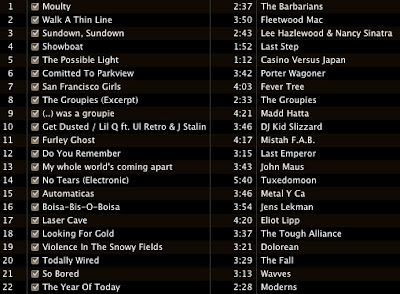 Hello, this is my inaugural introduction around these parts. I made this mix entitled 'Desert Dessert'. I started my early days making cassette tapes for friends in middle school. Gaining local notoriety for my A side: Wu-Tang & B side: No Limit mix tapes. This was back when everyone my age was listening to Mase & things of that nature. I would gather these albums (most with parental advisory) from my 2 older brothers or neighbors. Most of my friends had never heard of music like this. I had a double cassette tape deck stereo in my room my dad gave me. The pause button was broken, but during dubbing I would press the pause & it would make this abstract record scratch noise. I would do that effect in between songs. That was my shtick. Anyhow, hope you dig this selection...


Posted by Benjamin No comments:

You Cant Make This Up

Welcome to the nexus of the interweb. We are the New Kidz and we parlay. Enjoy!

Please note: when downloading from mediafire right click on "click here to start download" and click "save as". After downloading create and label a new playlist in itunes. Unzip the file and drag and drop folder into that playlist, songs should list according to their playlist order. If you like the music I suggest you go out and buy the album, all music is for preview and taste testing purposes only. Enjoy.